Ingredients:​Directions:
take baby artichokes and trim off first two layers of outer leaves, then trim off any portion of the bottom stem that is longer than a 1/4 inch (this part tends to be a little bitter). After this you want to cut the top of the artichoke off about a quarter of the way as the top can be a little tough. The purple varieties are a little bit more tender and may need less trimming. If the artichoke is a bit larger I like to cut them in half long ways and this makes it easier for the marinade to get inside the leaves. While trimming the artichokes drop them in a bowl full of acidified water (cool water with a little bit of lemon or vinegar in it), this keeps them from turning brown. Once you trim the artichoke steam or par boil them for about five minutes. This is to get them a little bit tender so they can cook quicker on the grill. After steaming the artichokes let them cool while you mix together the rest of the ingredients. Mix all ingredients and whisk together well. Pour over the artichokes and let marinade for a few hours or even the day in the fridge. Stir every once in a while. Once you are ready to grill place the artichokes in a grill basket or on a grill mat as they are small and fall through easily. Grill on medium or medium high heat (depending on your grill) and let cook making sure to flip them on occasion so as all sides get a little browned. Serve hot or cold! These taste really good the next day when they are cold as well!
Ingredients:

2 cups bell pepper (we like to use mixed colors)

Cut the zucchini, eggplant, onion and bell peppers into bite size pieces and add to a frying pan with the garlic and olive oil. Fry the veggies until they start to become transparent, we like ours with a little brown on it. Add the tomato and basil and cook for a few minutes longer then remove from heat and it's ready to serve!

﻿Directions
Ingredients:​Directions:
Pre-heat oven to 425
Slice baguette in half inch slices and set aside. Slice zucchini in about quarter inch slices and set aside. Slice the tomato in thin slices and if they are large cut in half so they can fit on the bread slices without flopping over onto the pan.
In a small bowl place the 1 cup of mayonnaise and crush garlic into mayonnaise. Take basil and using scissors cut basil up in small pieces and add to mayonnaise mix. Using a fork stir mixture together until everything is mixed well.
Take mayonnaise mixture and spread a thin layer on each slice of bread and arrange bread on a cooking sheet, stone ware types work best as it keeps the bread from getting too soggy on the bottom. take zucchini slices and add one slice on top of each bread slice then place tomato slice on the top of the pile. Slice the mozzarella in thin slices and place on top of the veggies. Place pan of veggie melts in pre-heated oven and bake for 10 to 12 minutes or until the cheese has melted and started to brown. Remove from oven and let cool a few minutes before serving. Can be eaten while hot or when cool. 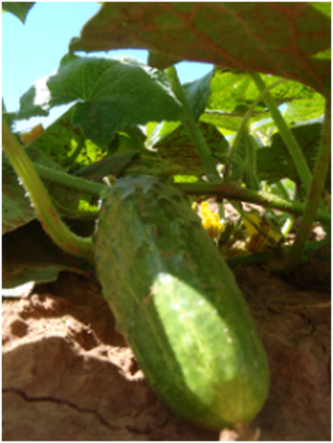 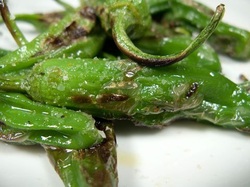 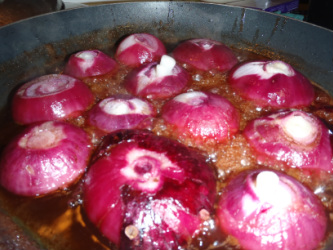 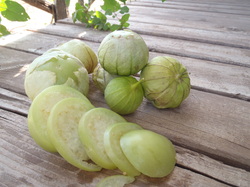 The Meaning of Pie blog has
a wonderful illustrated and detailed recipe that uses tomatillos:


For
the tomatillos, roughly  chop the tomatillos and place them in a small saucepan
with enough  chicken broth to just cover them. Simmer them for approximately 20
minutes or until they are well cooked and totally softened. Strain off  enough
of the cooking liquid so that you are left with about 1-⅓ cups of  tomatillos.
Set aside.

Cook and chop the chicken. I used 2
large breasts that I had brined  for 30 minutes in ½ gallon of water in which I
had dissolved ¼ cup sugar  and ¼ cup salt. I sliced the chicken and cooked it on
a grill pan until  done. You can also use chicken tenders. Set
aside.

In a small bowl combine the chicken, ½
cup of the Monterey Jack cheese,  the Parmesan cheese, green onions, chili
powder, salt and pepper. In  another small bowl, combine the green chilies,
tomatillos, sour cream,  and milk. Use an immersion blender to process it until
smooth. You can  also use a food processor or regular
blender.

To assemble, pour ½ cup of the tomatillo sauce in
the bottom of a 9” x  9” baking dish and spread it around. Place one layer of
corn tortillas  on top of the sauce. Place ½ of the chicken mixture on top of
the  tortillas. Place another layer of tortillas on top of the chicken. Then
spread the remainder of the chicken and one top layer of tortillas. Pour  all of
the remaining sauce on the top, making sure it goes down the  sides and between
cracks. I even poked a few holes in the middle of the  top with a fork to make
sure it permeated the whole casserole. Sprinkle  the top with the remaining
cheese. To repeat, the layers go from bottom to top like this: sauce,
tortillas, chicken, tortillas, chicken, tortillas, sauce, and cheese.  Let the
dish sit for about 10 minutes so that the sauce soaks in a bit  before baking
it.

Bake the casserole at 375 degrees for 25
to 30 minutes or until it is  nice and bubbly and hot. Let it stand for at least
5 minutes after you  remove it from the
oven.

To assemble, pour ½ cup of the tomatillo
sauce in the bottom of a 9” x 9” baking dish and spread it around. Place one
layer of corn tortillas  on top of the sauce. Place ½ of the chicken mixture on
top of the  tortillas. Place another layer of tortillas on top of the chicken.
Then  spread the remainder of the chicken and one top layer of tortillas. Pour
all of the remaining sauce on the top, making sure it goes down the  sides and
between cracks. I even poked a few holes in the middle of the  top with a fork
to make sure it permeated the whole casserole. Sprinkle  the top with the
remaining cheese. To repeat, the layers go from bottom to top like this: sauce,
tortillas, chicken, tortillas, chicken, tortillas, sauce, and cheese.  Let the
dish sit for about 10 minutes so that the sauce soaks in a bit  before baking
it.

Bake the casserole at 375 degrees for 25 to
30 minutes or until it is nice and bubbly and hot. Let it stand for at least 5
minutes after you  remove it from the oven. 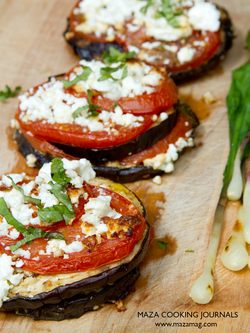 Grilling is one of our favorite ways to prepare lots of veggies but eggplant seems to be one of the best! This is one of our favorite recipes to use when camping as it is easy to make and can be cooked over an open fire, alternatively you can also prepare this in your oven with the broiler. Larger eggplants are better for this recipe and some of our favorite varieties for it are Black Beauty, Rosita, Listada and what we think is the absolute best is Round Mauve because the shape makes for perfect rounds when sliced, and the flavor is superb!

1 or 2 Eggplant depending on size

A few sprigs of basil

1 or 2 garlic cloves or minced garlic

Mozzarella, Parmesan or Feta cheese (whichever is your preference)

Directions:
Heat grill on medium high heat. Slice eggplant into about 1/4" slices (don't make them too thin or they will not hold up to flipping on the grill), coat the slices liberally with olive oil then add to the grill. While the eggplant grills on the first side slice tomatoes and squeeze the garlic cloves. Turn over eggplant slices when they are ready (about 3 minutes give or take), and add garlic and basil to the already grilled side of the eggplant, then top with a tomato slice on each eggplant slice. Add slices of cheese or grated cheese on top of all and then let grill until cheese is melted and slightly browned. Remove from grill and serve!
​Alternatively you can put all together and put in the oven under the broiler. Let cook until soft and cheese is browned. 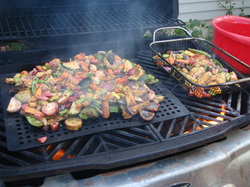 This one is a Rohwer's Farm Original:

Produce for grilling - I use a mix of whatever I have in the garden that would be good on the grill like zucchini, eggplant, onions, potatoes, summer squash, shelled fava beans, tomatillas, and tomatoes.

I cut the produce into bite size pieces. Veggies that take a little more cooking, like potatoes, needs to be cut smaller so that it can cook better on the grill. Throw everything together except the tomatoes as these will cook too quickly and fall through the grill. Add the sauce and let the veggies marinate for at least 30 minutes, longer is even better.  Remove the veggies from the marinade, reserving the remaining sauce.  Place the veggies on a medium high grill in a grill basket or on a grilling plate and cook until veggies get soft and start to brown, stirring and drizzling the sauce over the veggies occasionally. Add the tomatoes for the last few minutes of grilling. You can also make this on the stove in a pan. 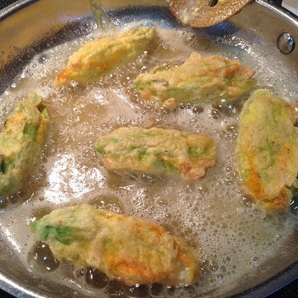 
​Directions:
Mix goat cheese, serrano, scallion in a separate bowl.Whisk egg in another bowl.Place flour in a third bowl.Gently open squash blossoms to make a “cup,” be careful not to tear the sides of the flower.Gently stuff blossoms with cheese mixture. Fill to the point where the sides of the flower can be pressed together to close over the cheese mixture. The flowers should be full to the point where they feel firm. A chopstick is helpful for pressing the cheese into the bottom of the “cup.”Dip each cheese stuffed flower into the whisked egg and then roll in flour.To fry, fill a frying pan with at least 1/4 deep vegetable oil and heat to the point where water droplets flicked on the surface of the oil will “sizzle.”Gently place breaded squash blossoms in hot oil and fry until lightly browned on all sides. (About 2:30 minutes on each side.)Let cool slightly and ENJOY!
Notes: These are great as a main dish, or as a side. The filling could be adapted in any number of ways to fit your tastes! 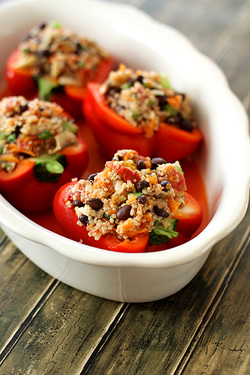 From the Vegetarian Times.  This dish freezes well for future meals. Quinoa provides whole-grain goodness and a serving of protein. 1. Heat oil in saucepan over medium heat. Add onion and celery, and cook 5 minutes, or until soft. Add cumin and garlic, and saute 1 minute. Stir in spinach and drained tomatoes. Cook 5 minutes, or until most of liquid has evaporated.

2. Stir in black beans, quinoa, carrots, and 2 cups water. Cover, and bring to a boil. Reduce heat to medium-low, and simmer 20 minutes, or until quinoa is tender. Stir in 1 cup cheese. Season with salt and pepper, if desired.

3. Preheat oven to 350°F. Pour liquid from tomatoes in bottom of baking dish.

4. Fill each bell pepper half with heaping 3/4-cup quinoa mixture, and place in baking dish. Cover with foil, and bake 1 hour. Uncover, and sprinkle each pepper with 1 Tbs. remaining cheese. Bake 15 minutes more, or until tops of stuffed peppers are browned. Let stand 5 minutes. Transfer stuffed peppers to serving plates, and drizzle each with pan juices before serving. 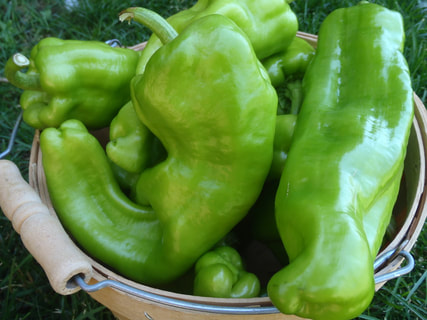 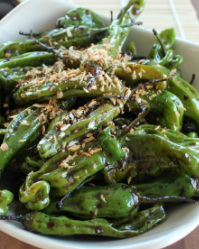 juice from one lime 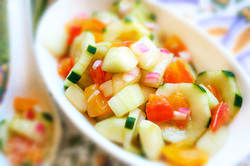 The Gluten Free Goddess blog
has a delicious recipe for cucumbers:
The flavors mingle and intensify
overnight, so if you love a fresh   "pickled" flavor make this recipe the night
before you wish to serve it;   tossing it a couple of times as it chills to
distribute the dressing.

In a large non-reactive bowl combine
the cut and sliced cucumbers with the diced onion and tomato.
Whisk your
dressing ingredients in a glass measuring cup until frothy and pour all over the
cuke salad. Gently toss to coat. Cover and chill at least an hour before
serving.
Serves 6
Copyright © 2020